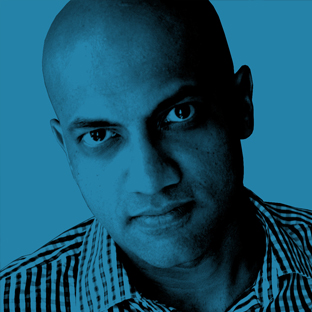 Rajesh Parameswaran - Picador Guest Professor in the summer semester of 2018

was born in Chennai, India and moved to the United States as an infant. His short stories have appeared in Granta, McSweeney's, Zoetrope: All-Story and Fiction. 'The Strange Career of Doctor Raju Gopalarajan' was one of three stories for which McSweeney's won the National Magazine Award for Fiction in 2007, and it was included in The Best American Magazine Writing and in The United States of McSweeney's: Ten Years of Accidental Classics. Rajesh Parameswaran lives in New York.

Published 2013 at Bloomsbury: I Am an Executioner

A Bengal tiger wakes up one morning realising he is ravenously in love. A pompous railway supervisor in a remote Indian province bites off more than he can chew when a peculiar new clerk arrives on his doorstep. In another place and in another time, a secret agent who spends her days watching the front door of an unknown quarry discovers something she isn't meant to. An immigrant housewife in a Midwestern town geeing up for Thanksgiving makes a wish she may come to regret. And a small and famous country's only executioner claims his conscience is as clean as his heavy, washed stones.

With this glittering, savage and elegant first collection, where reality loops in Borgesian twists and dazzles with Bollywood exuberance, where frayed photographs take on a life of their own and where elephants wish only to die with dignity, Rajesh Parameswaran bursts onto the literary landscape as an astonishing new talent.

“I Am an Executioner gets the pulse racing from word one. I love Rajesh because his last name is even more impossible than my own, and because he has redefined the American short story for me. Bravo!” –  Gary Shteyngart, author of Super Sad True Love Story